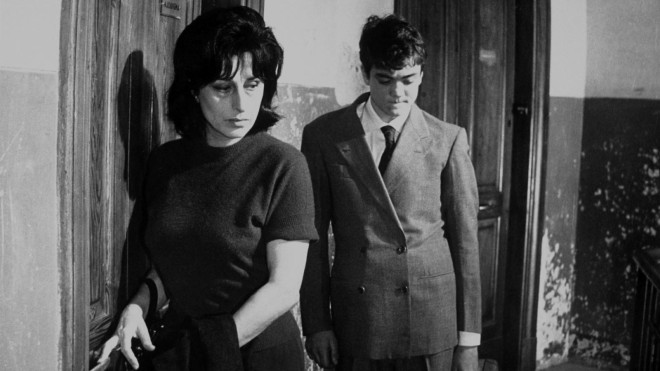 Pasolini takes us to the outskirts of life and challenges our assumptions in the moving and intelligent Mamma Roma. Almost a mix of Nights of Cabiria with Mildred Pierce, this thoughtful tale of a woman who will do anything for her son leaves nothing at face value, and pulses with the confusion and pain of everyday life.

Anna Magnani gives a captivating performance as Mamma Roma, a former prostitute who saves up to move with her son Ettore (Ettore Garofolo) to Rome, where she wants to begin a new chapter in life. She renounces her past and takes on operating a vegetable cart in the piazza market, and she encourages Ettore to go to school to mingle with the right sort of neighborhood kids.

Ettore’s path takes a different turn, however. He becomes smitten with Bruna (Silvana Corsini), a young woman already with child. His friends tease that she goes out with “everyone,” but Ettore doesn’t mind, and forges a tender connection with her. Mamma Roma doesn’t approve of the match either, and urges him to forget about her and take on a respectable job as a waiter in Trastevere.

Through all its ups and downs, Mamma Roma is consistently engaging for its rich, authentic portrayal of real, complex characters. Mamma Roma herself is a loud, boisterous prostitute one moment, and an affectionate forward-thinking mother the next. The girl Bruna is frequently attacked for her reputation despite her mostly angelic demeanor; then when Ettore is beaten down and his weakness revealed, she laughs in his face and joins the other boys. Characters ebb and flow and take on different roles throughout the story, rejecting stagnant personalities for more genuine, complicated impulses when facing trying circumstances.

Its deep respect for everyday life is heightened through the fluid religious undertones. Mamma Roma is often portrayed as a Mary figure, dedicating her life to her son and suffering the terrible loss that befalls him. Ettore is the Christ, driven by some innate destiny and is even held strung with his arms open in a prison. Bruna could be the Magdalene, to whom Ettore is drawn despite what society may think of her.

Pasolini’s films are anything but ordinary, and the humanism and authenticity flowing through Mamma Roma elevate what could have been some weepy melodrama into intelligent and thought-provoking art.