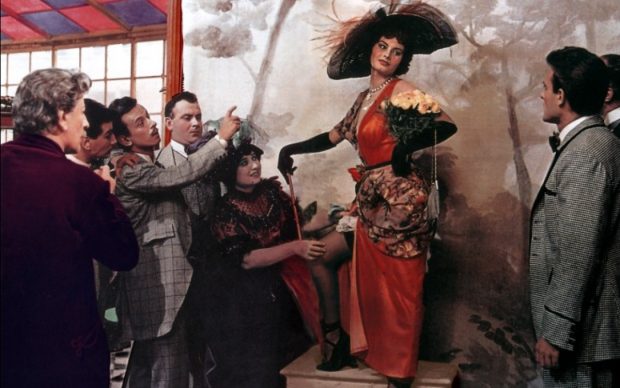 In 1950s Italian cinema, you can usually count on three things: black and white cinematography, realism (for the most part – magical realism is allowed), and definitely not musicals.

Carosello Napoletano (Neopolitan Carousel) is the inverse of all of these, making it a wacky surprise but an enjoyable departure from what we often think of during this period of film. Loosely speaking, it is the story of Naples throughout time, starting in the Medieval era up to the Unification, through the dawn of the 20th century and past World War I. It glides through these disparate time periods quite suddenly, using devices as concrete as sheet music blowing in the wind, to more melodic as “O Sole Mio” is sung in one scene, before the time-jump and the same tune is sung in the next era.

The Carosello kept jumping around so much, I honestly had a hard time staying on board and being fully engaged with the action, knowing we would bounce ahead shortly. In particular, the movie’s earlier segments told as a mix of operetta and ballet, with so much dancing and ensemble characters flying around it was tricky to monitor who was who, and whether it even mattered. (Would they be back again for the next song? Probably not.)

Things slow down by the 20th century, fortunately, and we get fascinating vignettes around immigration, the impact of war, and other historical moments in Naples’s history. A noteworthy segment has three middle-class men, sitting nonchalantly on a park bench, who notice a sign encouraging men to enlist in the armed forces. They begin fidgeting and tapping their toes in rhythm, matching the syncopated marching of an army. They suddenly burst up from their seat and march along down the street, joined by men of all uniforms and social classes, uniting together to perform their civic duty.

The film works best when the full Carosello comes together. The single segments don’t quite stand on their own, but the terrific finale brings all of them together. It’s Christmas in Naples, and a family we’ve been following most of the film (the backbone to our time-traveling adventure) doesn’t have a roof over their heads.

A son of the family gazes sadly into a window display, where a massive Nativity display is set, in an awe-inspiring moment of beauty. Italian Nativity scenes are unique in that they contextualize the birth of Christ within their own community; Nativity sets are massive, including bakers, accordion players, clowns – figures who probably weren’t roaming around in Bethlehem 2000 years ago, but their inclusion brings the story of Christmas closer to home (literally) and makes the community part of the miracle.

The camera pans out to show a living Nativity of Naples. The impressive Naples set we’d seen for the previous two hours is shown in its full, stunning sound-stage glory. The people we’d followed through centuries of history are all dancing together in the piazza, transcending time and place for the annual celebration. As lumpy as its parts may be, the whole of Carosello Napoletano is a colorful, thought-provoking, and touching look at the eternal spirit of Naples.