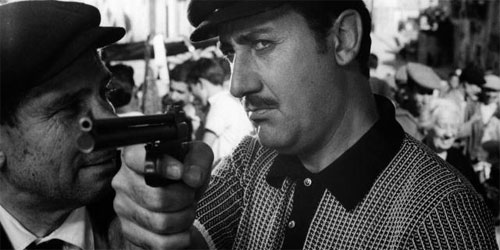 Mafioso is a prime example of the commedia all’italiana as a complex film blurring the lines between comedy and drama. For the most part, it is entertaining though the climax is rather slow and brings the film to a sputtering end rather than a truly satisfying conclusion.

It is the story of Nino Badalamenti, a Sicilian technician working and living in northern Italy with his family. He is a man fully in control of himself and his surroundings, dictating everything from his colleagues to his own family, calling the shots for their family vacation to his native Italy.

This is where the movie finds its strengths; as someone of Sicilian ancestry, I can appreciate the stereotypes and differences between Sicilian and northern Italians, and Mafioso plays these up to very funny effect. The Sicilians are coarse, hairy, loud, and over-the-top foils to the suave and sophisticated northerners. (I find this even funnier as it is from an Italian perspective; most non-Italian films view all Italians as the same, and it’s great to find a movie that actually recognizes that there is diversity within this country.)

The comic-tragic elements come from the main narrative though, of Nino’s struggles with his own identity as a Sicilian (and of course the inevitable mafia-stereotype that comes along with that) and getting back into the circles of crime he was involved with as a youth. This pulls him back into committing a terrible crime, which the end of the film implies will affect him to the rest of his days.

Mafioso is certainly a good movie, entertaining and thought-provoking; the sequence surrounding Nino’s crime, though, is told too slowly in my opinion and doesn’t contribute much to the greater conflict of identity politics, which is conveyed much more strongly for the rest of the film.