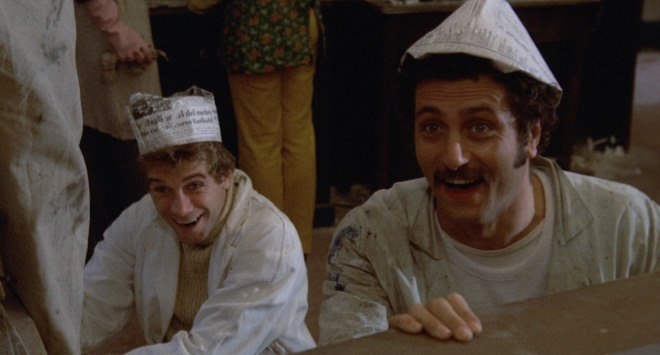 Posted on February 27, 2020 by Steven Posted in WritingTagged 1974, All Screwed Up, Cinema, Film, Lina Wertmüller, Movie, Tutto a posto e niente in ordine

“Everything is upside down here.”

Carletto, All Screwed Up

From the opening moments of Lina Wertmüller’s All Screwed Up (Tutto a posto e niente in ordine), we are dizzy, disoriented, and displaced. The first shot follows two silhouettes exiting a tunnel into the hustling, bustling urban landscape. The camera spins around this city in motion, as its inhabitants scurry in and out of the frame like worker ants, and even the musical score swells with dissonance and cacophony. We catch glimpse of two young men, Carletto and Gino, who seem out of place: dressed in traditional fare, not the modern 1970s attire, struggling not to get lost in the chaos.

It doesn’t take long for them to learn the world they’ve entered is one where everything and everyone is for sale. They pledge to make their way economically in cosmopolitan Milano, where they bounce between jobs and in and out of labor disputes. They join with new friends to all get an apartment together: “a commune of workers.” The divide between workers and landowners is a battle literally on the home front; they and their fellow tenants are at risk of eviction, so the landlords can make way for luxury apartments. Even inside their unit, the tension of economic exploitation continues to simmer: the women in their group have outsmarted in the men in terms of commodification and how to get ahead: charging the men for use of the TV, access to the laundry machine, assuring the men it’s a better bargain than going it on their own. This seemingly advantageous offer of shared goods and resources, albeit for a price, somehow doesn’t fare well for the men of the commune.

Economics even seeps into their personal lives, eschewing the possibility of romance for the more profitable prospects of getting ahead. Carletto becomes smitten with Adelina, one of the roommates, who seems to have feelings for him but refuses his pleas to marry her: it’s “anti-economical,” but her counter-offer is that they save up and open a store together. She’s less interested in a romantic life partnership than she is in a business deal. In a very upsetting scene, Carletto violates Adelina against her will; she cries out for help, and later begs him to stop, for fear that their physical act of love will knock over their TV set. In contrast, the other woman in Carletto’s life is a silent, wealthy siren who emerges occasionally throughout the film, and enraptures him with every appearance. The last time he sees her, she is getting married, setting her life in the traditional romantic path Carletto so desires with Adelina. Perhaps the economically advantaged have more freedom to pursue life and its pleasures, and the working class simply can’t afford to pursue, or make time for, love. Another roommate, Biki, forbids any coupling among the commune, but doesn’t have issue with selling herself to earn enough for a down payment on a car. Sante, a father struggling with seven children, tries to sell himself to keep his family afloat. The working class are so desperate they will literally commodify their bodies for sale. Any notions of “traditional” romance or love are unrealistic in a social landscape where the primary goal is economic survival.

The workers face disunity and inequality, even among each other, grasping for any sense of control and hierarchy within an ultimately powerless class. Regional prejudices and discrimination permeate through interactions as early as the opening scene, when Gino comments that Adelina, also clearly a rural outsider in urban Milano, is “not normal. She’s a hick. She’s a southerner.” None of them are accustomed to the hustle, bustle, and chaos of the big city, but as northerners from San Rocco just outside Milano, they have something up on Adelina to claim some dominance. These tensions also fire up in the workplace among supposed equals: the working class in the kitchen. A scuffle breaks out between a waitress and one of the cooks, and reaching for any put-down she can, she spits out “You shitty Piedmontese.” They are both in the same social stratum, reporting to the same boss, but as someone (presumably) more accustomed to the urban landscape, she claims superiority to the rural emigrant she’s up against.

Another English title for the film is “Everything Ready, Nothing Works,” and a literal translation from Italian is “Everything ready and nothing in order.” Wertmüller’s work begins and ends with organized, collective chaos: first that of the Milanese commuters walking, taking trains, driving Vespas, racing to get nowhere; and concludes with the harried labor in the restaurant kitchen, the camera literally spinning in circles and staying in place. As complex and confounding the machinations are, whether economic, social, cultural, even sexual, no one gets ahead and no one can make it. The forced business and meaninglessness of it all come to the surface as artificial inequalities prop up infrastructures and systems of exploitation. Pointed and sharp as always, Wertmüller exposes these power structures, at all levels: keeping everything ready and truly nothing working.